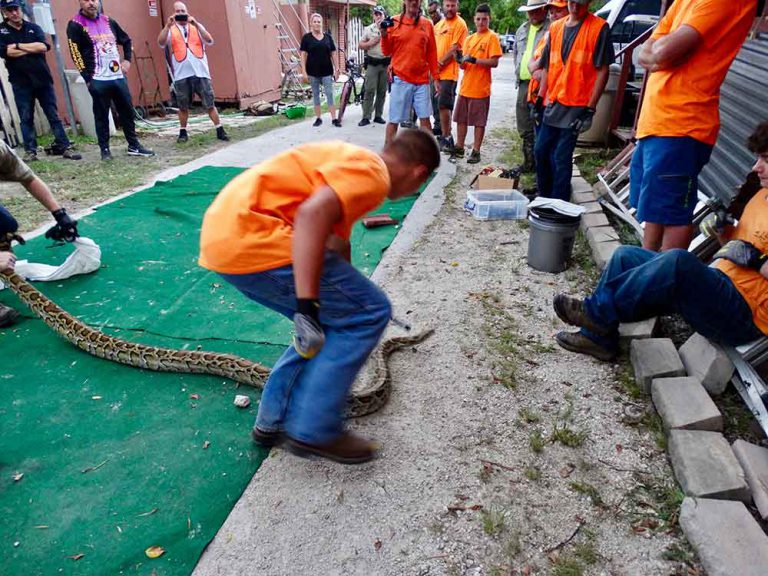 The Florida Fish and Wildlife Conservation Commission (FWC), along with South Florida Water Management District (SFWM), worked together under the direction of the Youth Hunting Program of Florida (YHPF). They put another successful Python hunt with volunteers from Florida Sportsmen’s Conservation Association (FSCA).

July 29th, 2022, Friday evening started with an educational program given by Ali Courtemanche, a member of the FWC Python Team with Florida Fish and Wildlife. She explained all aspects of finding and removing Burmese pythons from how they entered the Everglades to where we are with them now—ending the program with what is being done about removing them to save the Everglades ecosystem.

At dusk, python contractors Ozzie Gonzalez, Myron Looker, Matthew Kego, and Matt Briggle loaded everyone into their vehicles equipped to hunt python snakes. They were each joined by a youth hunting guide from (YHPF) Billy Boatwright, Steve Stroh, Vic Mortimer, and Jessica Beegle; they all left, going in four different directions from where the hunt was on. We were lucky to harvest four snakes with two participants on Friday evening.

Saturday started with an early lunch. After everybody had fueled up, we set out to go fishing. The group got to participate, parents, guides, and youth; the target fish species was Peacock Bass, mainly because it’s on everybody’s bucket list. We were highly successful on our fishing trip and caught Oscars, Cichlids, peacock bass, and several other native species. Everyone had a good time and did not even realize it was 100° outside. Everybody had a chance to enjoy the Gladesmen culture in the heart of the Everglades, where they visited different locations to learn about the Everglades Ecosystem. During the trip, everyone observed a female alligator on her nest and other wildlife.

The group was back out hunting again Saturday evening. Another lucky hunter harvested a python which made our total of five snakes for this hunt. A giant snake gathered on this trip was 10’2″.  and The smallest snake was 6’6″. Sunday morning, we got up, did our paperwork, and enjoyed breakfast.

Ozzie Gonzalez returned with harvested snakes and helped clean and skin the Python snakes from the weekend’s hunt. We all departed from Everglades Holiday Park, where everybody traveled back safely to their home.

Removing these harmful invaders from the wild was another win for the Everglades. Burmese pythons became established in Florida due to escaped or released pets. Youth Hunt Program is a great way to teach the next generations to be ethical Sportsmen who will respect wildlife and be stewards of the land.

As a Huntmaster myself for the last 18 years, I have to say this was one of the most successful youth hunts I have seen as a volunteer for the Youth Hunting Program of Florida.  I want to thank Florida Sportsmen’s Conservation Association, Python Contractors, SFWMD Staff, and FWC Python Management Team for pulling this all together and making it so successful. Five (5) pythons were harvested in two nights, and the largest was 10’2″.  We need to remove pythons from the Everglades and protect this ecosystem for generations, and each invasive Python eliminated represents hundreds of native Florida wildlife saved.

We are looking forward to conducting another successful hunt next year.

Bishop Wright JR. Shared the album Youth Python Hunt 2022 with you from the Flickr app! Check it out: